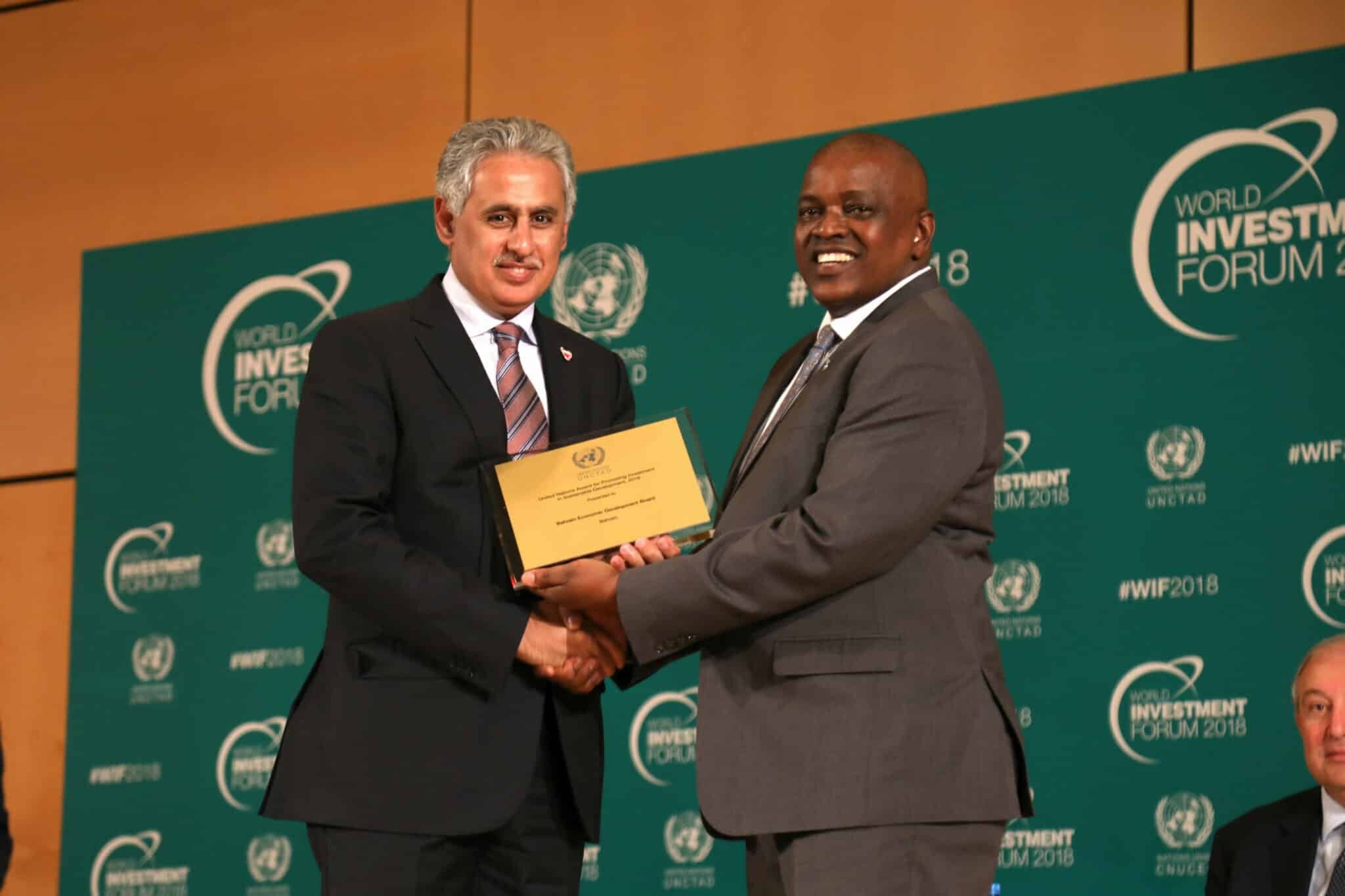 The Bahrain Economic Development Board (EDB) has won the United Nations’ Investment Promotion Award for excellence in boosting investment into sectors that will help meet the UN’s Sustainable Development Goals. The award acknowledges EDB’s work with Amazon Web Services that is set to launch its first Middle East ’Region’ in Bahrain in 2019.

The award is yet more recognition of Bahrain’s success in transforming into a digital economy, with the AWS investment a central pillar of efforts to support long-term economic growth and the creation of high-quality jobs. The increased availability of cloud computing will help Bahrain and other countries in the region develop emerging sectors, enhance productivity, and support the growth of start-ups.

Receiving the award at the World Investment Forum in Geneva, H.E. Zayed R. Alzayani, Minister of Industry, Commerce and Tourism, and EDB Board Member said: ‘In line with Vision 2030 the government of Bahrain has launched initiatives in human capital development placing the Kingdom on the right track for growth. Bahrain has become a hub for dozens of value-added projects following long-term plans to attract investments for infrastructure projects, the development of legislative frameworks and easing the process for investment in various sectors.

“‘Bahrain is honored with the recognition of this international award, which is also an addition to our continuous successes that are a result of the vision of His Majesty King Hamad bin Isa Al Khalifa, His Royal Highness Prime Minister Prince Khalifa bin Salman Al Khalifa and His Royal Highness Prince Salman bin Hamad Al Khalifa, the Crown Prince, Deputy Supreme Commander, and First Deputy Prime Minister” H.E. Khalid Al Rumaihi, Chief Executive of the EDB, commented: ‘Working across the public and private sectors to attract investment is at the heart of our Team Bahrain approach and was crucial in securing AWS’ significant investment. This award is a testament to that, and we are immensely proud to have the UN’s Investment Promotion Award recognize many years of hard work by the EDB team.’

The collaborative approach to addressing the needs of overseas investors is illustrated by recent regulatory reforms to enable a conducive commercial environment for all sectors, but most notably in technology. For example, improvements have been made to the regulatory environment including updating the bankruptcy law; introducing a data protection law; and the reduction of minimum capital requirements for starting businesses. All important elements for producing a thriving digital economy.

Innovative approaches to encouraging growth is a key focus of the UN’s Sustainability Goals and are illustrated by a number of other initiatives in Bahrain that were highlighted by the award’s judges. These include the adoption of a Government-wide Cloud First policy; and the C5 Cloud Scalerator; a long-term partnership between AWS, the EDB, and Tamkeen, Bahrain’s public body for enhancing labor force productivity; which is the region’s only accelerator for start-ups wanting to develop a cloud-based commercial strategy.

An additional focus of the UN’s Sustainability Goals is the promotion of high-quality education, a factor that runs throughout Bahrain’s efforts to build an economy fit for the future. As part of its investment, AWS has launched its Training and Certification Programme in Bahrain and has received unprecedented levels of response. Over 2,300 young Bahrainis have signed up in the scheme’s first few months, a sign-up rate exceeding both China and India.